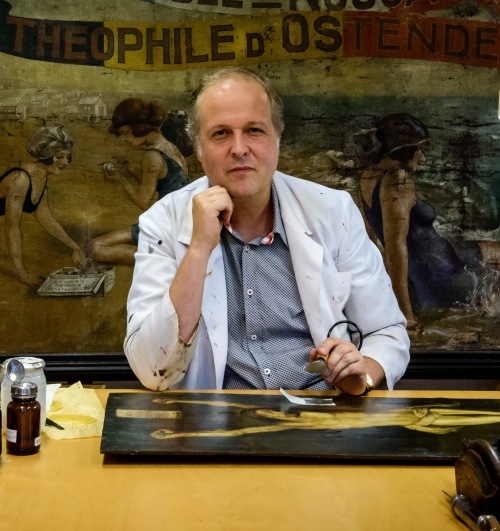 Frederik Cnockaert is born in Belgium (Kortrijk) on the 18nd of october 1968. He soon discovered a passion for art, drawing and painting. He received his first artistic education at the Royal Academy of Fine Arts of Bruges, the medieval metropolis that still shows the rich legacy of past centuries. In Bruges, melting-pot of cultures, art and science be could unfold. He studied subsequently at the Academy of Bruges, Monumental arts (painting and sculpture ) the Higher Institute of Arts Sint-Lucas Luca Institute for Arts in Ghent from 1986 to 1990, studied Pedagogical Higher Education (1989-1990) and art restoration at the Royal Academy of Fine Arts center for conservation Ghent from 1990 to 1992. He specialized in the restoration of paintings and sculptures and did practical internships at the Art conservation in the Royal Academy of Fine Arts Gent and the Royal Institute for art expertises. He then worked for 8 years full time as restorer of the old masters for the City Museums of Bruges, restored 'master-pieces' for the Groeninge museum. Restoration of 19th-century works from the archive "Capronnier". These are key when working on the list masterpieces of Flemish art and cultural history.  Conservation commissioned by the Flemish Government (Department for Arts and Heritage) and KADOC (Documentation and Research Centre for Religion, Culture and Society).

Since 1992, Frederik Cnockaert is the atelier manager and owner of Kerat. There started his career as a freelance and independant art restorer with his art clinic studio Kerat and restored many works of great artists. Recently Frederik restored a Flemish renaissance sixteenth-century masterpiece for the Virgin House Museum of Antwerp. A Painting by Jacob de Backer; 'Christ Blessing the Children'. This painting portrays a Biblical scene in which Jesus has the children come to him. “Let the children come to me, and do not hin-der them, for the kingdom of God belongs to such as these” (The gospel according to St Mark, 10, 13-16). This theme is eminently suited to institutions such as the girls’ and boys’ orphanages. Jacob de Backer painted this renaissance art work. He was one of the greatest and most successful colourists of his era. He apprenticed with Antonio Van Palermo, which is why he is sometimes known as Jacob van Palermo. Several courts owned some of his works. Jacob de Backer is considered one of the most mysterious yet fascinating Flemish artists of the sixteenth-century Antwerp school. Art studio Kerat is the house top craftmanship from Flanders, Belgium ! Professional conservation and restoration of fine art, antique and contemporary art objects, including sculpture, decorative arts, picture frames, ceramics, plaster, marble, ivory, metal, and wood. Serving individuals and institutions in Belgium and beyond for over 30 years.Restoring the glory  Pdf photo Frederik Cnockaert and painting from Museum Kortrijk and download here TV extract– video mp4

Frederik is a highly talented restorer, whom I found very trustworthy, punctual and customer-friendly. From the moment we met, I had a feeling that my painting would be in good hands. While working on it, Frederik kept me very well informed and regularly sent me pictures and reports, showing me the current status of the project. The result was nothing less than outstanding, with Frederik having found the delicate balance between a meticulous execution of the necessary restorations and a trueness to the age and spirit of the work of art. It was a pleasure to work with him, and I would certainly hire him again! He does a great job. He has transformed one of my paintings from dark lifeless canvas to a brilliant detailed work of art. Need to call for an appointment, it’s been a while. Katharina Van Cauteren, Chief of Staff at The Phoebus Foundation

Frederik is a very professional top craftsman conservator with golden hands and great passion for his work. He has chosen to be restaurator although he could have been an excellent painter also, but this was not his call. He works very detailled and dedicated when he restores historical art, his passion. Frederik is one of the best contemporary restaurators at this very best moment and he works for a lot of museums and particular collectioneers. I have lots of admiration for his skills and knowledge of art history, that makes of him a great art restorer. He does a great job, is able to transform a painting from a dark canvas to a brilliant and more detailed work of art. It is amazing how this restorer paints like an artist brings life to paintings. You are blessed to have so such golden talent and an excellent person to deal with, very efficiënt and helpful in taking care of art! Vincent Messelier, contemporary plastic artist

Visiting Suriname I noticed a wooden statue by a local artist in a local art shop in Paramaribo. Back home I found the art gallery's website and ordered the wooden statue and arranged transport overseas. Unluckily the statue got damaged during the flight. I contacted Frederik to restore the statue and after sending over some pictures he told me that the wooden structure could be restored even without visible traces or scares. He restored the statue perfectly and it is still the eye catcher in my living room. Thank you for that Frederik. Yannic Beckers Honorary President Director CM Telecom Belgium

Frederik is an art connoisseur with a deep-rooted passion for fine art. Museums, art institutes and individuals have relied on its profound knowledge and reliability for restoring their art collections.Over the last thirty years his Art restoration studio 'Kerat' established its name as a specialized art restorer conservator, contributing to international collections, museums, galerie exhibitions and publications, as well as participating in international art fairs. Doctor Lawjer R. Leclercq

My goodness, that man can talk art ? Fabulous! The way you talk about the Art & the Artists ! I am surprised how much there is to tell about painting restorations. People ! Be wise, and listen and learn ! A master tutorial is being conducted! Frederik Cnockaert is a master in the restoring of art. He has also a nice atmospheric and emotional house, I always want to go back in this wonderful house, it is a delight to walk into this temple of art Ann Dejonckheere interior architect and art collector

Frederik is an eminent specialist on paintings, he restored a top painting by Jordaens for a client of me. The discolored varnish and some minor retouches gave the painting on panel a yellowish patina that detracted from the otherwise superb state of conservation of the pictorial surface. The panel needed a conservation treatment to remove the varnish and to enhance the retouches. I found in his ART studio ‘kerat’ the expertise and craftsman of the highest quality . Frederik is an art connoisseur with a deep-rooted passion for fine art. Also museums, art institutes and private individuals have relied on its profound knowledge and reliability for restoring their art collections. Frederik Cnockaert is my address for restoration and conservation of Art. His studio does preservation of old and new paintings on canvas, paper or panel. Polychrome wood statues, stone sculptures carriers. Interesting is also that his expertise offers are made free. Maurice Meul Fine Art Expert.

Frederik Cnockaert is an eminent specialist of art restoration.“ He is one of those rare people who not only have a great love of art, and an obvious talent, but a sympathetic attitude towards people, like me, who find themselves with an assortment of paintings in need of help in restoring them when, in my case, they had suffered years of secondhand smoking damage and yellowed varnish.” Dr. Valentin Vermeersch Honorary President chief curator of the Bruges Museums, eminent specialist on sculptures

Atelier Kerat has cleaned and restored a number of paintings at my request, both privately and in my capacity as curator of a private family collection. His ability to restore a damaged picture to its full glory, is so skillful. His awareness of colour and original style means that the restoration is not noticeable in itself, but that the picture as a whole has returned to the freshness of when it was first finished. I have no hesitation in recommending him skillful, knowledgeable and meticulous work, to anyone.” Kerat is the place to be, friendly people with lot of experience in their profession. Paul Depuydt Private Client STORSACK BELGIUM Bruges Area, Belgium

Painting Conservator Frederik Cnockaert and I have been working together for eight of years in the Groeninge Museum of Bruges. Frederik is an excellent craftsman, patient, skillful and resourceful. The work he has done with me for the Museums and private collectors has been exemplary. His prices are reasonable, he can work to a timetable and is very good at listening to clients needs and explaining procedures. I would not hesitate in recommending him. I have been restoring paintings for forty years and he is the best restorer I have worked with.” Francine Huys Honorary Chief conservator at Musea Bruges, eminent specialist on paintings.

Art Studio Kerat is the top in Fine Art, Art Conservation and Restoration. I find it always interesting to watch Frederik and learn from from his insightful art conservative skills, knowledge, and expertise ! "beauty is in the eye of the beholder" is my device. Frederik Cnockaert is very efficient teacher restorer, it’s a pleasure to work with! "One looks back with appreciation to the brilliant teachers, but with gratitude to those who touched our human feelings. The whole art of teaching is only the art of awakening the natural curiosity of young minds for the purpose of satisfying it afterwards. " Geert Vandepoel Bediende Sales Co-ordinator & back office Executive · Brugge

Frederik Cnockaert is a very talented Conservator and Restorer of Cultural Heritage. He is specialised in artefacts painted on wooden and textile supports; wooden carved artefacts; wooden furniture and structures; assembled artefacts and/or painted synthetic materials. Immediately after obtaining his degree, he had the opportunity to carry out an internship at the Royal Museum of Historical Fine Arts in Antwerp; a highly constructive and dynamic experience from both a human and a working point of view. He was able to work in a continuously stimulating environment and live another reality, capturing every aspect and deepening the numerous comparisons. He restored for me a magnificant panel of Jordaens and carved and painted wooden Crucifix by unknow author; seventeenth century. I still enjoy this work every evening in my home. Johan Boens